A vintage 1940s ash tray and flyer from the Hotel President in Waterloo, IA, the birthplace of the @nwa . Pinkie George and 4 others wrote the charter agreements there to form the NWA in 1948. The manager of the hotel was Lark Gable, grandfather of legendary wrestler Dan Gable. pic.twitter.com/deDUe2oTAL

Published at 3:05 PM
Email ThisBlogThis!Share to TwitterShare to FacebookShare to Pinterest
Filed under: NWA History

Published at 10:18 AM
Email ThisBlogThis!Share to TwitterShare to FacebookShare to Pinterest
Filed under: Japan, Magazine, Ric Flair

One of the most controversial and disputed stories in NWA title lore involves two matches Ric Flair had while NWA champion in 1982 with the Dominican wrestling legend Jack Veneno.

As the story is told to this day in the Dominican Republic, Veneno won the championship in the first match and successfully defended it in the second, only to relinquish it later when he chose not to travel and defend the title across the NWA.

This of course is pure fantasy, and although Veneno apparently did leave the ring after both matches with the title belt in hand, it appears it was orchestrated to prevent fan's going into full riot mode, and possibly resulting in Flair being drug through the streets of Santo Domingo. In the end, it's a story not that inconsistent with other matches where wrestlers left the ring with belt and the fans thinking they had won the title (examples include Bruiser Brody, Dusty Rhodes, Jerry Lawler, and others) although this particular story is filled with much more drama and has stood the test of time.

Javier Ojst wrote a comprehensive article about all of this on the Pro Wrestling Stories website (link below) which gives all the details as best as they can be recounted through the sands of time. A good job on his part. But after reading it, and watching the highly edited footage of the match in the documentary Jack: La Historia de Jack Veneno, it's abundantly clear that any credence to the notion of a legitimate NWA title victory by Jack Veneno is nothing more than arbitrary revisionist history. And revisionist history is something pro-wrestling is particularly good at creating.

This is not to diminish the legendary status of Jack Veneno in the Dominican Republic, a bona fide pro-wrestling legend there in every sense of the word. To this day, fans there still believe their hero was NWA World Champion. Who could blame them, given the orchestration of such a grand tale?

The article by Ojst is definitely worth the time. Check it out here:

Published at 10:25 AM
Email ThisBlogThis!Share to TwitterShare to FacebookShare to Pinterest
Filed under: Jack Veneno, Pretender

You Don't Want Harley Race Smiling at You

Published at 1:41 PM
Email ThisBlogThis!Share to TwitterShare to FacebookShare to Pinterest
Filed under: Harley Race

Back in 2012, while surfing the internet, I came across a great article by pro-wrestling superstar Tom Prichard on his "Doctor's Note" blog.  In his article "Harley Race vs. Jack Brisco: The Night Brisco Became NWA World Champion", Prichard looks back at the significance the date July 20, 1973 had for him in several ways, not the least of which was the historic title change between Race and Brisco, also the night the belt known as "the ten pounds of gold" was first presented to the champion.

Prichard, who grew up in El Passo, TX, watching wrestling out of the Amarillo territory, was there in Houston that night and the pomp and circumstance surrounding the big night left a lasting impression on him. I greatly enjoyed his first hand account.

Included in the article are images of the actual newspaper reports that week (not reproductions) as well as programs, magazines, and his row 12, seat 8 ticket stub. All very cool, indeed.

Many of the clippings seen in Prichard's post are also featured in the "Ten Pounds of Gold" book, copies of which were provided by Harley Race.

Click the link the below to go to Tom Prichard's blog and relive the night history was made in Houston. 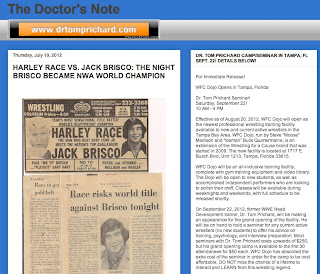 Dr. Tom's blog is "The Doctor's Note" and is located here:
http://drtomprichard.blogspot.com/

Originally published on the Domed Globe site in October of 2012
Published at 9:04 AM
Email ThisBlogThis!Share to TwitterShare to FacebookShare to Pinterest
Filed under: Harley Race, Houston, Jack Brisco, Tom Prichard

Published at 10:52 AM
Email ThisBlogThis!Share to TwitterShare to FacebookShare to Pinterest
Filed under: Giant Baba

We're always appreciative of newspapers that do a good job of presenting wrestling in a journalistic fashion. This is a particularly good article in the Tampa Tribune promoting an upcoming card for Championship Wrestling from Florida on February 8, 1977, just two nights after Harley Race defeated Terry Funk with an Indian deathlock to win the NWA World Heavyweight Championship.

Who knows who wrote the piece. It doesn't really sound like it came from the office, but it sounds way too informed to be written by the a staff sports writer either.

The article captures all the complete twists and turns in the wonderful story leading up to this night at the fabled Fort Homer Hesterly Armory. There were actually two separate stories being told.

The first story cemented former champion Jack Brisco as Florida's top contender for the NWA title. Many of the fans coming to the Hesterly Armory that Tuesday night had witnessed Brisco cleanly beat Harley Race, also a former champion, that past Saturday in St. Petersburg. Surely Brisco could beat Race again, this time with his newly won NWA World championship at stake in Tampa.

The second story told answered a question many might have had following the finish to the title change match in Toronto. As a teenage fan watching wrestling in 1977, when the film of the match from Toronto was shown on Mid-Atlantic television, it seemed strange to me that Race had won by submission with an Indian deathlock. I had only ever seen our local hero Paul Jones win with that hold. In the wrestling magazines, it seemed the reports usually suggested Race typically won with various suplexes or his infamous flying headbutt from the top turnbuckle, resulting in wins by three-count pinfall. Why had Race instead gone for the submission for the win against Funk in Toronto?

The answer, it turned out, played out the night before in Florida.

The main event of the card in St. Petersburg on Saturday night was Terry Funk defending the NWA title against Dusty Rhodes. As the article above reports, Funk injured his knee in the match against Rhodes, and "against his better judgement" went ahead with the scheduled title defense against Race the next night in Toronto.

The rest, as they say, is history. Race knew what most fans didn't about the night before in the St, Petertsburg Bayfront Arena. Funk was hurt, and Race took advantage. He defeated Funk in 14:10 with an Indian death-lock to capture the gold belt. (I can still hear ring announcer Norm Kimber make the famous call.) It was a hold Race used infrequently (if ever?) and seemed almost out of place as it happened that night in Maple Leaf Gardens.

As the author of the article pointed out. Brisco's victory over Race in St. Petersburg came three days too early. Race got the better of him in Tampa this night to retain.

The injury to Funk's knee in St. Petersburg gave Funk an excuse he could bandy about after his loss to Race in Toronto the next night.

The article also colors between the lines nicely, accurately reporting key dates in the NWA title history of Brisco and the Funk Brothers, and even including a reference to an NWA title change in the same building eight years earlier to the week.

It's just an all around amazing piece to be found in a newspaper, and one of my favorite clippings from the history of the NWA title changes during the domed-globe era. And for those curious, it explains one of the mysteries about the historic Toronto finish some fans may have had at the time.

Video of Harley Race's win over Funk in Toronto can be found on the Domed-Globe website here.

Late update: See three pages from the Florida program "The Grapevine" for the Feb. 5 show in St. Petersburg that set the stage for Toronto. (Thanks@bobbynorton9115 on Twitter.)

This article was originally posted on our sister website, The Domed-Globe.

Own Ten Pounds of Gold! 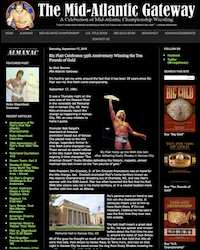